Over the winter of 2011/12, my friend Fu of Bearford Yarns and East Coast Organicsplanted an organic orchard on her farm in East Lothian consisting of both heritage and modern varieties of apples, pears and plums. The heritage trees were included so that she could help preserve a number of lesser known British fruit varieties. When I visited the orchard in the summer of 2014 to admire her hard work planting over 1000 trees, I was amazed at the number of species I had never heard about! Supermarkets sell a very limited range of British fruit. 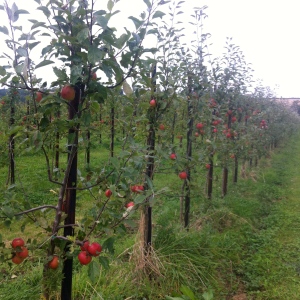 Recently when I was thinking of a new botanical design, her beautiful trees came instantly to mind. After a number of pattern revisions and swatches, I came to the conclusion that the Shetland weaving yarn from Jamieson's of Shetland wasn't suitable for this design.  However, their 2-ply jumper weight Spindrift Shetland yarn was!

Next, when selecting Spindrift colours, I decided to choose only those that reminded me of her fruit, especially the apples and pears that are in my veggie-box each week! Therefore, I chose the following three bases in Cardinal, Yellow Ochre and Moss with a complimentary-coloured tree motif.  Each bag is lined with a matching linen lining from Scottish Linen in Kirkcaldy, Fife. 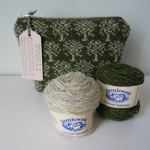 Small project bags in this new design will be for sale on Saturday 2nd December 2017 at the Wool Tribe Knitters' Christmas Partyorganised by Edinburgh Yarn Festival at Akva in Edinburgh. Then, in the Woolly Originals' online e-shop in early December 2017.

Thereafter, small, medium and large bags will be for sale at the Edinburgh Yarn Festival in March 2018.